Avasharks are officially being released on the Avalanche Blockchain. After steadily building a grassroots community from the ground up they have finally released their mint date to the public, 20th February 2022.

Reminiscent of one of our favourite childhood cartoons – Street Sharks, Avasharks is a superb 3D generative project and you can see that a great deal of thought has gone into the character creation. AvaSharks has also said that all of the 10,000 NFT’s will be 3D rigged and ready to be deployed into future Metaverse games when possible.

AvaSharks are building towards becoming a major player within the Blockchain betting industry by being one of the first projects to introduce wagering features, aiming to transform the project into a high-end and fully operational gaming platform as they progress through their roadmap.

After the mint, the Atlantis Gate will open and feature a Coin Flip and PvP betting platform, followed by a Lottery system that will run every quarter for eligible holders. 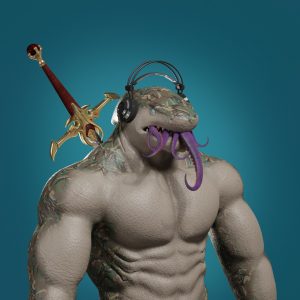 Holders of the 10,000 AvaSharks will then be eligible for a free Gen 2 release that will bring extra excitement as the NFTs will be upgradeable using the Nesting dynamic, meaning eligible Avasharks can be merged to increase attributes such as Speed and Stamina for better performance in Shark Races, which will be exactly like a horse race but with AvaSharks and an underwater theme.

Beyond this, the project is aiming to become Multichain with the planned implementation of different Blockchains increasing turnover and revenue streams. The team are focused on building for the long term future and will take an iterative approach to new goals as the roadmap milestones are achieved, take a look at their roadmap here.

We will leave you with the Trader Joe Honorary NFT that the team recently released, he looks awesome!

Our First Honorary Megalodon Shark goes to @traderjoe_xyz for his roll in transforming DeFi trading on @avalancheavax !

Everyone at the Sharks will like to thank you for the hardwork and amazing initiatives you bring into the space. #AvaSharks #AvaxNftRush pic.twitter.com/tLGRlTFeAi


If you liked this article, you’ll love What are Avalanche NFT Marketplaces Missing?